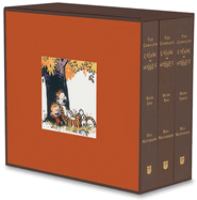 The Complete Calvin and Hobbes

Back in the days of being bright-eyed youngster, I was someone who certainly had my treasured collection of "Calvin & Hobbes" comic books, too.

I can still recall the big, joyful kick that I often got out of reading about the comical adventures that these two vivid, little characters had together.

And - Hey! - Even today (as an adult) I find that I can still appreciate (with a childlike wonder) author and creator, Bill Watterson's perspective on the thrill and wonder of a thriving childhood (as fondly seen through the eyes of Calvin & Hobbes).

Great book I laugh every time I read it.

These are amazing.. a three book set.. but unless you want to binge read all of it I would recommend checking them out in order as there is a lot of material to cover. I read a lot but I find daily comics hard to push through like a novel so I read 3-5 weeks at a single setting to appreciate it.

For anyone who's not at all familiar with the "Calvin and Hobbes" comic strip - Here's a brief outline of what one can expect to see in this volume....

This cartoon follows the often-humorous adventures (both real and fantasized) of Calvin, a precocious, mischievous and very outspoken 6-year-old rugrat, and his sardonic, stuffed tiger, Hobbes.

Together these 2 rascals (especially Calvin) get themselves into all sorts of comical predicaments that cover such broad issues as public education, philosophical quandaries, environmentalism, and flaws of opinion polls (to name but a few).

At the height of its popularity - "Calvin and Hobbes" was featured in over 2400 newspapers, worldwide.

i luv these books

Bill watterson has spent ten years creating one of the most clever, original, and beautifully drawn strip in the history of comics. Personally, I think 10 years of a masterpiece like Calvin and Hobbes is better than 40 years of recycled fat jokes (garfield)

The best comic ever. Perfect for kids, adults, or tigers.

I love Calvin and Hobbes. Always have. Calvin is relatable and SO FUNNY!!

Calvin and Hobbes never ceases to have me in stitches!!

Easy to read, fun to read.

Calvin and Hobbes is one of the most superbly written series there ever was. I think of Calvin everyday and use his mottos and examples in my daily life. Bill Watterson really knows people and is a very wise man. His comics are fantastic, witty, funny, and in some ways, realistic. They help me with everything and I really miss the series.

This book has a lesson in it, DON'T SMOKE, Calvin & Hobbes is certainly a well book for the vivid mind, this comedy is good for hours of laughs

THIS IS SOOOOOO FUNNY X) :D

Calvin and Hobbes is a great comedy

I own this book and it is great

does anyone notice how the style of drawing changes a little as you read the books in order?

I have LOVED Calvin and Hobbes all my life and I absolutely love them... Great reading material too! I remember asking my mom " what does this word mean " all the time! Great clasic and still funny today, If your looking for a good, funny and all ages friendly book... I believe you have come to the right place... :)

I LOVE Calvin & Hobbes comics! They are SOOOOOOOOOOOOOO funny! And......I just........LOVE'EM!!!!!!
Wish there were new ones coming out though but I think Bill Waterson is dead? Isn't he? Or at least retired?
These are the BEST comics and if you want a good novel then you should look up Midnight Rider (by Joan Hiatt Harlow) Or Eric Walters he's a REALLY good author!
and
yeah Hobbes IS a fuzzy cute hairball!

Calvin adorble,funny and has a great imagination